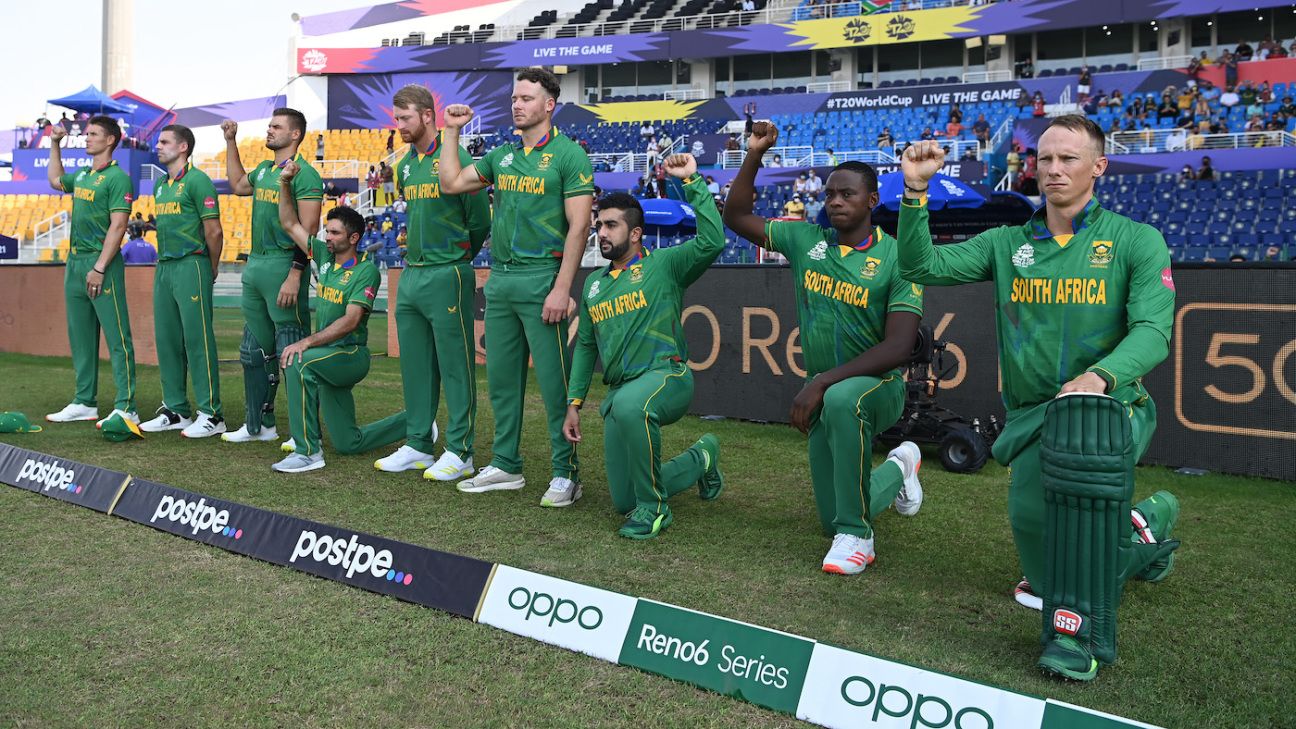 Cricket South Africa believe Quinton de Kock is “on an anti-racism agenda” with the rest of the squad, but wanted consistent conduct and messages from the squad at the T20 Men’s World Cup. This is what prompted the board of directors to issue a directive on Tuesday morning that the entire tour group must kneel down before every game, according to Chairman Lawson Naidoo. de Kock was the only person who did not comply and withdrew from the game against the West Indies.

Talk on a podcast Eusebius on TimesLive , Naidoo explained that CSA wants his team to be seen taking action against racism in public. “This is not to question the commitment of any of the actors in the fight against racism, but the conduct they display and the messages they send to the South African public and the community. wider world at a global event, ”Naidoo said. “We expect South Africans to be the world leaders on [this topic], given our particular history and the particular circumstances that prevailed in South Africa. It is a position where South Africa should be a leader, not a follower. “

While Naidoo was unable to clarify whether de Kock will compete in the remainder of the tournament pending a team management report, he cautioned against knee-jerk reactions to de Kock’s refusal to kneel. . “I believe Quinny is engaged in an anti-racism agenda, the depth of his belief is something you will have to ask him. In the team environment, I don’t think it is anyone who doesn’t want to. contribute to the fight against racism, “he said. “As to the consequences for Quinny – we’ll have to see when we get a report from team leadership.”

What is certain is that the ASC will not back down after Naidoo explains how the board made the decision to make it mandatory for the team to kneel down after seeing visuals of the game. opening of the team. “The visual images that emerged from the weekend’s game against Australia showed a team that looked disjointed and disorganized, not quite on the same level as each other, and that is something to be corrected,” said Naidoo. “There is no suggestion that any of the players are engaged in the fight against racism, but it is how they demonstrate it that is important.

“Cricket is the second most watched sport in the world. Our players, as leaders in this field, must take responsibility and see their greatest responsibility to society as a whole, and to their teammates and to be able to find each one. ‘other, even if they are not fully committed to the decisions made, in the interests of the team. That is the team spirit. “

He admitted that CSA did not consult with the team on the day the directive was released, but pointed out that discussions had been ongoing since last November, when South Africa hosted England and decided to do not kneel down. “We did not consult the team. It was reported that the team continued to discuss this issue and could not come to a consensus position that they could all agree on,” he said. declared Naidoo. “Discussions have been going on about this for some time. It’s not like it came out of nowhere.

“There have been discussions, cultural camps and discussion forums within the team. The team was unable to resolve this issue internally. We must resist the temptation to overcomplicate what is a very simple matter of taking a stand against racism and asking people to replicate what is happening in other sporting codes, in other parts of the world and in a position. which was adopted by several other teams. “

When asked if the gesture would be more powerful if done on purpose rather than under instruction, Naidoo conceded the point, but said he hoped the directive leads to the introspection that makes the knee genuine. “Volunteering would have been the ideal situation. That is why we gave the players time and space to try to come to this conclusion themselves. They could not do so and it was therefore necessary that the Board of Directors made this intervention It was a difficult decision to make and on which the Board of Directors unanimously agreed.

“I have a certain cynicism about this gesture [becoming meaningless] go forward, [but] knowing the context, which is why it was important for us to be absolutely clear, for the board to stand up and say that we have issued this directive and that we expect players to respect it, which is what they did. The long term and the other side of that is that the image he portrays across the world is one that will hopefully grow in the team environment and enable that true culture. and that commitment to grow knowing it’s the right thing to do. “