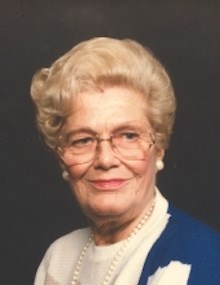 She was born on October 11, 1929 in Jackson, Michigan, a daughter of William and Matilda (Bertrams) Honer.

He graduated in 1947 from Jackson High School and attended Milwaukee Downer College in Milwaukee, Wisconsin.

On December 30, 1950, Barbara married John N. Rasmussen of Racine, Wisconsin, where they lived. He became secretary to the president of Modine Manufacturing Company.

They later moved to Ohio in 1959 and settled in Canfield.

Barbara is a homemaker, leader of the Girl Scouts and Boy Scouts, and member of the Canfield Women Club.

She has also been a member of the Saturday night dance club and Monday review book club in Youngstown.

He and his wife are members of the Youngstown Country Club, where he enjoys playing bridge weekly.

Barbara was preceded in death by her husband John, who died Aug. 28, 1987; and his brother, Robert Honer.

He is survived by his twin sister Eleanor Farr; children Judy (Bill) Arnaut and John (Kim) Rasmussen; and grandchildren and great -grandchildren.

At his request, there are no calling times and there will be a private service at a later date. Lane Family Funeral Homes-Canfield Chapel oversees the arrangements.

The family would like to express their deepest appreciation to Nurse Bonnie and her favorite aide, Mary, from Hampton Woods Assisted Living for their compassion and care.

Contributions in memory in Barbara’s name, may be made at the donor’s choice.