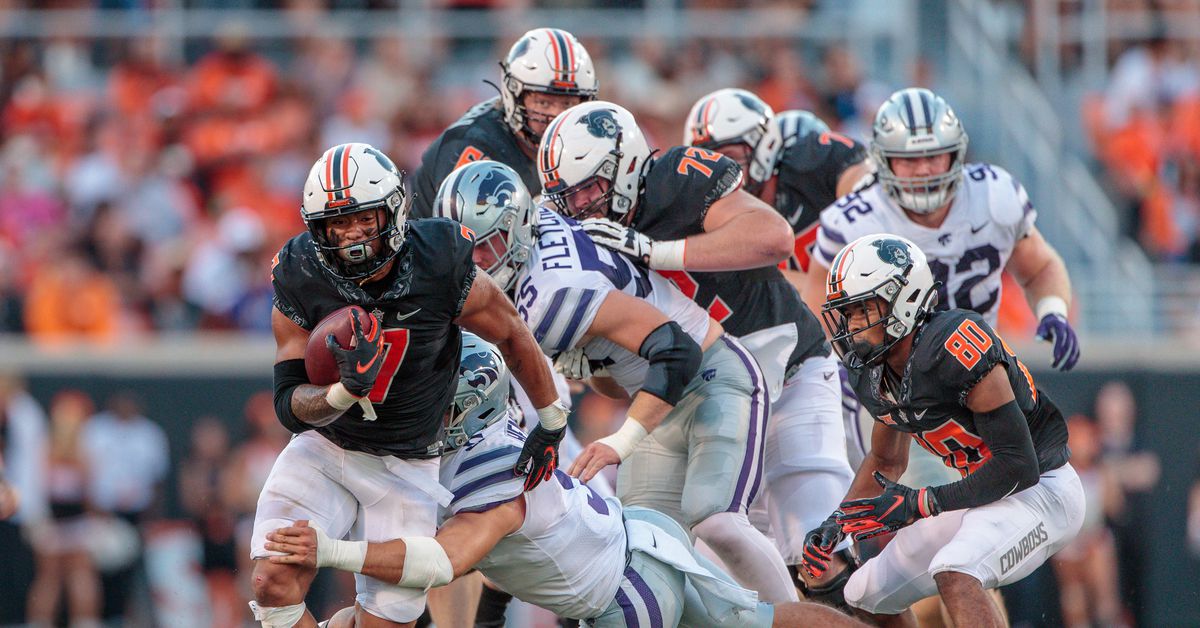 We’ve finally finished week four of the season, and basically everyone has played at least one conference game (TCU has yet to play a Big 12, and Baylor has played two). So now it’s time to try and start ranking the teams on a totally scientific and practical matter of putting KU in 15th place. Yeah, scientist. And totally not just because we included the new teams (as well as Coastal Carolina (again)), because we were going to include the new teams anyway.

The Cowboys started off slow, but a 4-0 start with a win over Boise State (at Boise) and K-State are by far the best among the Big 8 crew. But they’re still on shaky ground and welcome the Next weekend a surprising Baylor team at Boone Pickens Stadium. It must be nice to be able to open the Big 12 so often at home.

The Cougars could have easily taken the top spot, but they’ll have to wait until their Oct. 16 game at Baylor before they have a required Big 12 win to take the top spot. BYU is 3-0 against the Pac-12, but almost let a mediocre South Florida team come back last weekend. Next up is a contest against Utah State which the Cougars should win.

The Sooners are 4-0, and that’s about the best thing you can say about them right now. Tulane missed a potentially thwarted offer by one foot, a sorry Nebraska program threatened the entire game and West Virginia had a 13-10 lead in the 4th quarter before allowing two field goals in the final period. . But the Sooners are still the Sooners, and OU still has a lot of talent for getting the ball rolling quickly in the right direction. But they’ll have to figure things out quickly, as they’re heading to Manhattan this weekend.

The Bears could be the biggest surprise team to start. After a tighter-than-expected win over Texas State, Baylor came out and knocked out their next two opponents (Texas Southern and KU), before claiming the victory over Iowa State last weekend. The Bears will put their new Top 25 ranking to the test this weekend, as they head north to take on the undefeated Cowboys.

The Bearcats started the season 3-0, with resounding wins over Miami (OH) and Murray State, before needing a few halftime adjustments to get away from Indiana on the road over the course of the third week. Cincy took the day off last weekend and hopefully took advantage of the extra prep time as a trip to South Bend to face the Fighting Irish looms this weekend. A win over the Golden Domers would push the Bearcats up the standings and cement them into the Top 5 national teams.

The Chanticleers are again 4-0 to start the season and are finally gaining some national recognition while also sporting a top-20 ranking. Resounding wins over Citadel and KU at home, followed by a solid win over Buffalo in New York and another resounding home win over UMass prove the Chants weren’t just a flash-in-the-pan influenced by Covid. The Sun Belt action begins this weekend, with Coastal hosting the Louisiana-Monroe Warhawks.

The Longhorns find themselves here in the middle of the pack where they have been hiding for almost a decade. Their only trip outside of the state of Texas was a disaster, as they got tricked by their future (and former) conference mate, Arkansas. They bounced back to destroy Rice, before playing a defenseless shootout against a bad Texas Tech team (which they still managed to win 70-35). The Longhorns are still very suspicious and this weekend head north to the archenemy TCU.

Houston would be higher on this list if they hadn’t dropped that season-opening puzzle to Texas Tech. But seeing the result of the 28-20 victory over Navy last weekend, it looks like Houston is heading for a year off once the AAC game starts in earnest. We’ll know for sure next Friday, as they head north to Tulsa to take on a Golden Hurricanes team that has already pushed some decent teams to the brink this season.

9. The Wild Cats of the State of Kansas

Weft. What a difference a single week can make. If we had done this drill last week, the Wildcats would have been in the top spot. But a poor performance at Stillwater brings the Cats down to the bottom half of the league, both in this standings and in the actual standings. And it wasn’t just a loss, no, the Wildcats looked terrible for much of the game in all phases. They’ll need to sort things out quickly, as the Sooners are in town this weekend looking to get rid of a wildcat-sized monkey.

The Horned Frogs are sitting here because 1. they haven’t played a Big 12 game yet, and 2. they lost to SMU last weekend. TCU is 2-1 and has a good win over Cal, but the Frogs don’t look like the terror they once were under Gary Patterson. Their first Big 12 game comes this weekend, as they host the Longhorns, and will need to be prepared as Texas will likely look to break a losing streak against TCU.

The Mountaineers are an interesting team. At 2-2 it would be easy to write them off, but they lost their first game to a good team from Maryland, before rebounding a few weeks later to defeat a good team from Virginia Tech at home. And last weekend, he held a lead against OU before the Sooners took a win at Norman. The ‘Eers are a decent team, they just need to put all the pieces together. And their next chance is this weekend against Texas Tech.

While it’s surprising how good Baylor is, it might be just as surprising how bad the Cyclones have been so far this season. Matt Campbell fired almost everyone on a team that finished second in the Big 12 last season, and had to repeat that performance this season and legitimately challenge OU for the league crown. But for now, the Clones are 2-2, have battled northern Iowa (again), got crushed by Iowa (again), and their best win is on an average UNLV team. They have at least one home game against KU this weekend. Pretty hard to mess it up, right?

The Golden Knights are 2-1 so far this season, but won their first game against Boise State and came close to coming back against a good team from Louisville last weekend. The Knights are expected to score victories in their next two games (at Navy and against East Carolina), but the real test will be their road game against Cincinnati in a few weeks.

Why a team that is 3-1 so far down the list? Because getting bombed by Texas definitely devalues ​​beating Houston and Stephen F. Austin (which admittedly is one of the best FCS programs in the country). It’s probably a knee-jerk reaction more than any of the others, but Tech shouldn’t give up 70 points to the Longhorns, especially putting in only 35. My God. A strong performance against WVU this weekend could put them back on their feet, even with a loss, but their defense had better fly to Morgantown.

The best thing we can say about KU right now is that they won’t have another winless season. South Dakota tried, but the worst school in Dakota failed to defeat the Jayhawks in week one, and so KU is alone 1-3 so far this season. Progress. But they were still set on fire by Coastal Carolina, Baylor and even a bad Duke team. There is still a long way to go in Lawrence. They’re heading to Ames this weekend to take on Iowa State, and the Clones have a habit of making this game more interesting than it should be. Not that a K-State fan site would encourage KU to win a game, but it would be hard to deny the hilarity of the Jayhawks escaping Ames with the upset.